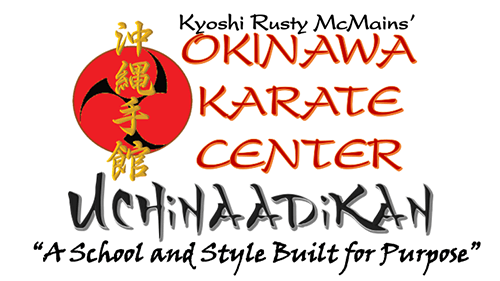 "The way of breathing is hard and soft" - by Rusty McMains

When I began my search in the early 1990’s for a suitable martial system that would adequately  advance my ever-growing knowledge of the martial sciences on which all eastern martial arts were based, I chanced upon Okinawa GoJu-Ryu. Within the Houston metroplex, a city of more than 4 million people, there were only 3 GoJu-Ryu dojo, 2 of which were run by the same Sensei with the 3rd run by one of his students. Having little awareness of this style and access to differing  teachers, I began to research the technical and historical aspects of this curious style. While much of the historical accounts varied from system to system designed to legitimize their respective organization, one common truth was the naming of GoJu-Ryu.

GoJu-Ryu’s literal translation as “Hard/Soft School/Style” is indisputable, regardless of style or lineage. However, when providing this translation to others, it does little to offer any real insight into the rich intent of my chosen field of study and practice. And just as my original style had little content beyond that of a competitive sport, this literal translation of GoJu-Ryu fell short as well. So, what’s missing? Context! What was it about this phrase that inspired Sensei Chojun Miyagi so much, that he would choose it to identify and register the name of GoJu-Ryu for all time?

With the passing of Sensei Miyagi more than 55 years ago, we will never truly know that why. Following the adage On ko chi shin 温故知新,“To study the old is to understand the new”, we can, through sensible and unselfish exploration, piece together plausible reasonings that describe the intent of all those through the centuries that contributed to the development and ultimate naming of GoJu-Ryu. Taking direction from Kanryo Higaonna and Chojun Miyagi, both who sought further understanding beyond that of their teachers by traveling to China, let’s do a little traveling of our own. Thank goodness for the ship called the “World Wide Web”.

As I began to research each of the kanji, I soon discovered the usual kanji used to describe breath 息or the action of breathing 息吹, blow 吹, breathe out; exhale 呼, inhale 吸(呼吸respiration) was missing. This was extremely interesting, to say the least. If it weren’t for me wearing a tank top, I would have rolled up my sleeves to ready the adventure. Let’s start the journey by first defining each of the kanji as they appear in this stance.

*吴is a variant of the 2 characters (reversed) and in Japanese means to give something, to do something for someone

As additional note, combined, the last two kanji 呑吐 infer an associative action, one action resulting from another (drinking and vomiting; coming and going).

Having the common definitions of each of the kanji helps in clearing the surface for a deeper dig. It’s now time to travel back in time and apply On ko chi shin 温故知新 “To study the old is to
understand the new”.

This stance and the 7 others that make up the “Kempo Hakku” 拳法八句Eight Maxims of Combat, are found in the Bubishi 沖縄伝武備志 (Okinawan version) and the original Chinese Wubei Zhi 武備志. The Wubei Zhi is the most comprehensive military book in Chinese history.

It was edited by Mao Yuanyi (茅元儀 Máo Yuányí; 1594–1640?), an officer of waterborne troops  in the Ming Dynasty. Wubei Zhi contains 240 volumes, 10405 pages, and more than 200,000 Chinese characters, which makes it the longest book in Chinese history regarding military affairs. At this point it is important to point out that the Bubishi is much more than book of combative principles and techniques. This expansive text describes herbs and their uses for daily health and healing, breathing and various physical exercises to benefit a warrior in all aspects of their daily lives, healing and medical practices, and more. This description on its own suggests that these 8 seemingly insignificant lines have much more worth beyond some modest words.

While the common definition of 法剛柔呑吐 “The way of breathing is hard and soft” may be acceptable for beginners, just like any single technique or kata, as the student’s experiences and studies develop so expands their understanding and application. I have found several other interpretations that give rise to consider other ideas. Two such interpretations:

Either of these presents another fork in the road; a road that takes us even further back, back to the origins of the birth of all martial arts and medical practices borne throughout the old world Far East.

These “ancient” methods of combat and medicine are connected to a system of breathing methods (qigong 氣功(trad. Chinese) that are much more complex than that expressed in the simplified definition. Sanchin 三戦 is known world-wide as the foundation of Goju-Ryu. Within Sanchin are various patterns of breathing (long-long, short-short, long-short, etc.) that must be aligned with the physical performance of the kata and vice versa We also learn that one’s breathing can be a combination of half inhale and half exhale. Then the percentage of inhalation and exhalation is not limited to 50/50 but rather has numerous functions. This law not only applies to the breathing but also to the application of the power as we execute the techniques… you can generate power and strength as you exhale as well as when you inhale.

Once again, we must look to history to further define and understand yet another explanation. It is understood that both Kanryo Higa(shi)onna and Cjojun Miya(gusku)gi (these alternative spellings/pronunciations represent the orginal hogan dialect for their respective surnames) altered Sanchin kata; Higaonna closed the hands with Miyagi further introducing “ibuki” hard breathing, muscle contraction and pattern from many of the original Chinese versions. These alterations and why warrant a completely different review and study to better understand the transition from “old style” Goju-Ryu to the modern Goju-Ryu commonly practiced throughout the world today.

To understand the true context of this and the other 7 lines, these maxims, individually andcollectively, explicitly infer the student must learn to “fight”. After all, these maxims and rules for combat found in the Bubishi are the foundational syllabus designed to achieve success and survival, both on the battlefield and in life. Only though real-time application (free sparring/randori) can the student understand what it takes to better themselves, to forge the body, mind and spirit while at the same time learning to care and protect oneself during that training. you can generate power (strong) as you exhale as well as when you inhale.

One meaning of this verse: We must be able to control our body very naturally. So that we can apply the strong and the soft techniques at our will just as we can control our breathing methods.

My personal favorite interpretation: Our strength and power, both physical and psychological (go) come from our understanding (ju) of the natures of man and our association to the world around us, and our ability to understand and apply what is needed at that time. Our experiences help define our beliefs which in turn affect our actions and provides each of us with certain results and outcomes. Altering any of these will directly affect the others, both negative and positive. The isthe definition of wisdom.

As customary, I ask others to read my writing prior to publishing to make sure my ramblings make sense. Charlie Berg, one of my students offered the following:

“The first feature of the literal translation you brought to light that really jumps out at me, is that each kanji has so many facets of meaning! This to me seems to not only invite, but encourage an exploration of several paths of thought, the very thoughts that must have been going through the head, not only of the original author, but through generations of dedicated students of go-ju. As I scrolled down, through each amazingly detailed kanji translation, both the order and meaning 'cloud' around each symbol seemed to say several things,

It is highly encouraging that Charlie’s response to the above simple historical and philosophical chronicle resulted exactly as intended; to capture his mind and heart. But these are only 2 of the 3 challenges inferred through the practice of Sanchin. These 2 are key to overcoming the everchanging and ever evolving physical challenges presented through our martial trainings, not to mention our everyday existence. Alternatively, by conquering our physical challenges we directly impact our own character development, as well as those around us, whether directly or indirectly.

Only by experiencing the pains associated with life, even the self-imposed kind, can one truly understand that success and failure come in many forms. The uneducated and inexperienced avoid failure. A person educated by experience understands the natural need for failure, and because of their varied experiences, has the ability to prepare themselves to recognize failures, past, current or potential, as a pathway to success. I recall my mother constantly remarking how she would never understand why I would not only allow people I know to beat on me, but that I would pay my hard-earned money to travel so strangers could do the same, or worse. She said I spent as much time in the ER getting stitched up as I did in class where I got the cuts in the first place. It wasn’t until she sat ringside at one of my earlier fights did it hit her (nice pun, huh). She never again questioned why. What better definition for GoJu-Ryu then that?!

Oh, and by the way, it’s interesting enough to note that the last kanji 志(warrior scholar) found in 武備志,Bubishi, is the second kanji used in the naming of Kenshi-Kai 拳志會(Ambition Fist Organizational). Coincidence? Understanding that Dr. Tetsuhiro Hokama is not only the World Headmaster of Kenshi-Kai International, he is also the founder and curator of the world’s first and largest museum dedicated to the history and preservation of Okinawan martial arts and undeniably one of the world’s leading historians and authorities on the Bubushi. Coincidence? I think not.

Over the past 100+ years, the martial arts, most particularly those identified as “traditional”, have been consciously engineered into an Olympic level sport. This siloed affect leaves little need for the coach or competitor to rationalize the historical and sociological benefits of their respective art into their trainings when keeping up with the most up to date competition rule changes and garnering sponsorship takes precedence. Don’t take that as me stating competitive and performance martial arts is a bad thing. I was as successful competitor for more than 20 years and had several students who completed at national and international levels. My remarks are intended to serve as a reminder that there is much more to be gained from martial arts’ training than the hanging of a medal around one’s neck. Being a true student of the martial arts is a privilege that can exist beyond our time on this Earth. Come to think of it, is this not yet another possible definition of GoJu-Ryu?!