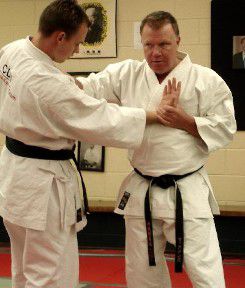 For more than 45 years, Shihan Rusty McMains has been bringing the very best in martial arts instruction to the US and Canada. The

is the ONLY Karate Dojo in the city of Houston that teaches authentic Okinawan Karate and 2 styles of Okinawan Kobudo (Okinawan Warrior Weapons Arts). In addition to teaching these very unique brands of Okinawa martial arts, all our teachings are based on sound medical and physical sciences as well as practical fighting and study methods developed by Shihan McMains through decades of real-time application. This places the

as one of the few schools in the world that expressly teaches these martial sciences as part of its general program, and one of but a handful in North America.

was born out of an overwhelming interest in the classical arts developed on Okinawa. The term "uchinaadikan" literally translates to "Okinawa (uchinaa) Martial Hand (di) Center (kan). A deeper translation, based on the extensive research by Kyoshi McMains and others, is more precisely interpreted as "The center for the research and study of the indigenous life protection arts of the Okinawan people". Therefore, UchinaaDiKan was chosen to reflect the true nature of all Okinawan martial systems when self-preservation was a high priority, before these arts became a sport.

Additionally important is to understand Shihan McMains’ choice to use just the kanji 手 (di) to refer to the original life-protection systems rather than the use of 空手, meaning empty handed or unarmed, which refers to the modern practice of Karate as a sport. While 手 is the noun for hand, the same kanji can, as in this case, represent a learned skill or talent, or one who performs an action. This further implies that the study and practice of Karate extends far beyond that as a competitive sport or form of physical exercise.

stands apart from most of today's franchised business based karate schools and systems in that our classes focus on the student as a person rather than as a client or customer.

Shihan McMains is not just a member of several of the world's leading martial arts organizations, he is a global leader in these fields. His highly expanded understanding of Western and Eastern sciences and his ability to apply those sciences to any form of martial arts training and protection techniques is unparalleled. He has consulted and trained instructors in Judo/Jujutsu, Arnis/Escrima, Karate, Taekwondo, MMA, Krav Magra and others.

A key to Shihan McMains' success in teaching his students is that he is himself an active student. In addition to his never-ending self practice and study in Okinawa Goju-Ryu and the Hokama Kobujutsu systems, Shihan McMains trains in Yamanni Chinen-Ryu Kobujutsu and is an active member of the Ryukyu Bujutsu Kenkyu Doyukai.

Just as impressive as Shihan McMains' personal experiences, is the collection of extensive experiences of associated schools and instructors both in North America and Okinawa that provide for a deep network of information and training unlike other organizations, all this with the intent in bringing our students the best instruction possible while leaving a legacy for future generations. 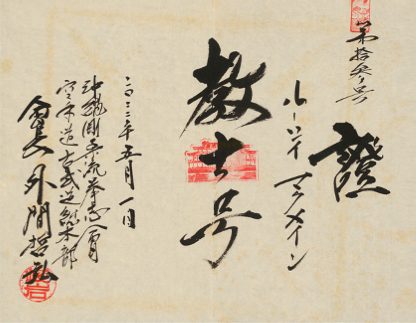 Shihan McMains holds Black Belt rankings and instructor certifications in several martial arts and is recognized as a leader in the specialized area of Martial Science:

Shihan McMains also has extensive training in other Okinawan/Japanese Karate styles, Filipino Arnis, Hapkido/Kuksool, Judo, Taiji/Qigong and Western Boxing. He is a former TECLOES and Texas Dept. of Corrections Self-Defense and Physical Fitness Instructor. As a former amateur and semi-professional fighter, Shihan McMains understands what "putting it on the line" literally means. Though his students may never step into the ring, it is important that his students approach their training with this in mind. 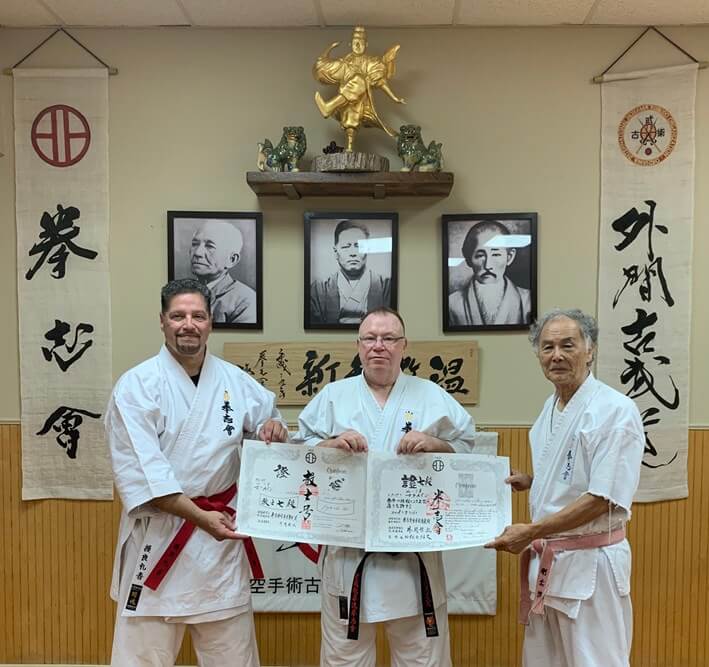 In the four plus decades Shihan McMains has been practicing the martial arts, he has had the distinct honor and privilege of training directly with some of the world's leading martial artists. Because of his close relationship with these instructors, some of the most prized classes were held in ordinary situations including hallways, poolside or on tennis courts of hotels, late nights in backyards, or restaurant parking lots while waiting for their table.

In addition to the hours of practice, there were hours of discussions on planes, in cars, hotel rooms and just hanging out at the house. With this privilege comes the responsibility of maintaining a very high level of knowledge, expertise, integrity, and trust.

What these masters passed to Shihan McMains was more than a martial art. They imparted the deep internal concepts and principles that supported their systems. The more they shared from their individual systems the more Shihan McMains began to see that they weren't all that different as these varied systems shared many of the same technical foundations. It was upon these "First Principles" that Shihan McMains developed his style of teaching.

, under the direction of Shihan McMains, is but one of a handful of dojos in North America and the only dojo west of the Mississippi River sanctioned and authorized to teach and represent this unique brand of Okinawan martial arts. The

has the privileged support of Hanshi Luis Morales, 10th Dan, Chief Instructor/Director KenShiKai NA.  Not only is Hanshi Morales the senior most student of Hanshi Tetsuhiro Hokama, 10th Dan, Founder and Head Instructor Kenshi-Kai International in the Western hemisphere, he was presented with the rare "Menkyo Kaiden" (License of Full Transmission) by Hanshi Hokama.

, we seek to foster positive virtues in our colleagues and friends, while providing a complete life-protection system for adults and children. We hope to cultivate a spirit that builds character, sincerity, integrity, perseverance, and respect through cooperative sharing and learning. An open mind is essential to achieve this goal.

Our brand of martial arts is unique than what is found in most of today's franchise based martial arts studios. Modern martial arts were designed to support the various specialized sports, losing much of their original lifetime benefiting intents. The foundation of our teachings are built upon the same time proven sciences that gave birth to the original martial and holistic healing arts found throughout India, Indochina, China and Japan, further supported with modern technologies. The physical and mental health and therapeutic benefits are far reaching and follows the student throughout their life. You can view more specific details on our Benefits page.

No one is a better example of these health benefits than Shihan McMains, who has successfully been managing cancer and associated side affects since 2012. His doctors firmly believe that his physical condition and positive attitude developed over his lifetime of martial arts practice are just as much a part of his recovery as chemotherapy and other common cancer treatments.