GoJu Ryu Karate is unique in the world of martial arts. Where other schools of Karate have divided and detached into splinter groups, GoJu Ryu has remained the closest to the original teachings of its two main contributors. This page deals largely with the general history that affected all Okinawan Karate.

GoJu Ryu Karate is very well defined in its history and lineage. GoJu Ryu is distinctive in that it has remained largely unchanged from its original Chinese combat arts with Lin Shixan (White Crane) to Pan Yuba (White Crane), Taitei Kojo (Kojo-Ryu), Wai Xinxian (Hsing-I/Monk Fisrt) to RuRuKo (Whooping Crane) and then passed on to Okinawa masters Aragaki Sisho (Monk Fist), to his student Kanryo Higaonna and ultimately to his students, Chojun Miyagi (Founder GoJu Ryu) and Seiko Higa (founder of Shodokan Dojo).

The naming of GoJu Ryu came more by accident than by intention. Shinzato Jin'an, who was Miyagi's senior student at the time, gave a public demonstration while in Japan. When asked what this unique style of self-defense was called, Shinzato could not answer as the Okinawan masters did not identify their arts into specific schools or styles as the Japanese had done for centuries. Upon his return to Okinawa, he discussed with Miyagi what had transpired and Miyagi decided it was necessary to have a name for his art in order to cooperate with other Japanese martial arts and to identify his unique style. He was the first of the Okinawan masters to name his art. Although he named his art GoJu Ryu, he seldom used the name nor did he raise any signs using it. Though there are much deeper meanings, GoJu Ryu can be literally be translated as "Hard (go - yang Chinese) and Soft (ju - Yin Chinese) School".

Because of Okinawa GGoJu Ryu's 400 years of traceable, unbroken history, in 1998 the Dai Nippon ButokuKai, the society that governs all Japanese and Okinawan martial arts in Japan, recognized Okinawa GoJu Ryu as the ONLY form of Karate, Japanese or Okinawan, as an ancient martial art. PlacinGoJu Ryug Goju-Ryu alongside other Japanese arts like jujutsu and kenjutsu which have lineages dating back 900 years is a huge accomplishment. Secondly, since Karate is Okinawan by birth makes such an honor within Japanese society that much more impressive.

GoJu Ryu's history is a culmination of the native "di" (te - Japanese) arts of Okinawa which date back over 1000 years influenced by the introduction of Chinese kempo in the 14th century as well as other arts from around Eastern Asia. Even more important was the the direct studies by Higaonna and Miyagi on mainland China in numerous armed, unarmed and healing arts over a combined period of about 20 years.

In 1477, after unifying the 3 kingdoms on Okinawa, King Sho Shin proclaimed a ban on all weapons by peasants and nobility alike. This ban was an attempt to put down any rebellious activities and secure his rule of Ryukyu. In addition, he ordered all members of nobility to live within the confines of Shuri Castle where he could keep an eye on any potential throne seekers. Except by the palace nobility, this began the secret practice of the martial arts, both empty handed and weapons, by the common people in Okinawa.

The Satsuma Samurai Clan, after being exiled from Japan, invaded Okinawa and stormed Shuri Castle. Okinawa became a puppet state of the Satsuma Clan but kept a false loyalty with the Chinese Emperor for reasons of trade and finance. It is a misconception that the Okinawans and the Japanese Samurai battled each other. The Samurai depended on the Okinawans for food, labor and other goods. Therefore, they protected the Okinawans from bandits, piracy, looting, etc. and in return the Okinawans gave a form of devotion and loyalty.

The people of Okinawa were forced to take their family traditions of practicing their native martial arts deeper into secrecy. This lead to more stylistic differences according to one's understanding and personal preferences based on many factors such as physical attributes and abilities. The inability to openly share with other practitioners helped to shape what would later become known as the geographically defined three schools of Ryukyu Kempo

There are many schools of Karate in the world today, all of which can trace their roots back to Okinawa. However, at the turn of the 19th century there existed three distinct teaching styles, each of which was referenced by the name of the city or region in which it was practiced. Though not proper named styles, they were known as Tomarite, Shurite and Nahate. The Tomarite and Shurite styles unified to become known as Shorin-Ryu, which has splintered into scores of other styles including Shotokan, Wado-Ryu, Shito-Ryu, Isshin-Ryu, Kiyokushinkai, TaeKwonDo and TangSooDo. Naha-te has remained closest to its purest form and became known as GoJu Ryu.

Ryukyu kempo refers to the original arts of Okinawa before its modernization into present day sport Karate. "Ryukyu" is the name of the chain of islands south of Japan with Okinawa being the largest. Because of The Ryukyu's location, these islands became inter-modal ports and key trade routes for Japan, China, The Philippines, Taiwan and other neighboring cultures. This in itself would easily suggest that the arts that developed on Okinawa were most assuredly influenced by fighting traditions from other countries and cultures.

Kempo", or "kenpo", is the Japanese translation of "quanfa" (chuanfa), which in Chinese means "boxing method" or "fighting method". Ryukyu Kempo therefore translates as "Okinawan method fighting" or "Okinawan method of boxing". Through this definition, the term Ryukyu Kempo is employed as a generic designation to identify the original fighting arts of Okinawa as a science of self-protection before the modernization of Karate as a cultural art and sport. Choki Motobu and Gichin Funakoshi both used this term referring to Okinawan Karate in their writings at the early part of this century as there were no specific style designations at that time.

Ryukyu Kempo is not a specific style like GoJu Ryu or Shorin-Ryu. Rather Ryukyu Kempo encompasses those Okinawan arts prior to the modern era with an emphasis on life-protection techniques. Ryukyu kempo is not compliant to tournament sport Karate as it is absent of many of the physical and mental restrictions required for an "ippon" or point. Ryukyu Kempo bridges the gaps between styles and aids the student in defining their techniques regardless of style. However there are those that have attempted to "cash in" on less than knowledgeable westerners by passing Ryukyu Kempo off as some "mysterious, secret, lost Okinawan Family martial art". Fortunately, like the others with their "unique, like no other..." arts, there isn't much mystery to it at all.

The abolishment of the Samurai class wearing the sword and top-knot, marked by the downfall of the Tokugawa Shogunate and the beginning of the Mejii Restoration Era in 1868, brought Japan and Okinawa out of the age of feudalism and into the modern world. The Mejii Era focused on promoting education and instituted laws for all regardless of birth class. The new society eagerly endorsed sports and recreation to advance these new virtues thereby given birth to modern martial arts. The ban on practicing Ryukyu Kempo(toudijutsu) was officially lifted in 1901 and it began to emerge openly as a part of the Okinawan culture. Demonstrations for the Royalty of Okinawa and Japan helped bring about an acceptance by the Japanese people.

Prior to the end of the 19th century, Okinawan Karate began to mold in accordance with Japanese society. This helped ensure Karate's acceptance by the influential Japanese martial society and secure Karate's continued practice and growth. The secret practice of karate ended as the masters of the Ryukyu arts were asked to teach their "di" to draftees of the newly formed Imperial Japanese military as a form of physical development and discipline. Karate was introduced into the school systems in Okinawa and underwent even more radical innovations with the emphasis shifting from self-defense to physical fitness to help physically and mentally prepare these boys for future induction into the military.

As part of Japan's desire to come up to standard with the rest of the world, organized sports were introduced into Japanese society. This lead to the creation of judo and kendo as well as other martial arts as sports. The more dangerous moves and their applications were removed for safety reasons and thus began a new tradition. This radical change represented the end of what was once a complex and lethal form of self-defense.

In 1936, a meeting of 8 of the premier Okinawan karate masters was held on Okinawa. This meeting was intended to formalize their respective schools into a single form of this "new karate". The agenda was to formalize and implement a single curriculum to include "public kata", terminology, etc. Unfortunately, due to the war Japan was raging in China, Korea and Russia, this was not fully realized. Most of the Shuri-te and Tomari-te schools (Shorin-Ryu) which were represented by 7 of the masters present had begun the transition. However, Goju-Ryu had not completed the re-organization process.

The single most important decision to come out of this meeting was the official adoption of the new kanji for their art. Originally, the ideograms for Karate meant "China hand", with the first character pronounced "tou" or "kara" representing China's Tang dynasty (618-907). This serves to show the h3 ties that Okinawa had with China.1905 was the first time the present character for "kara" (also pronounced "shu") was used.

The new kanji can be interpreted as "empty" or "void", but not in the sense of a weaponless art as most intend. Herein, "kara" comes to represent a deeper, spiritual embodiment of more than just the physical aspect of martial arts training. Through diligent physical, mental and moral development, the Karate practitioner is unlimited or "void of limits" in their abilities to accomplish the most difficult of tasks.

The suffix "do", as used in judo, kendo, aikido and other arts means "method; way or path to seek perfection by way of... ". The new suffix replaced the old one, "jutsu" (jujutsu, kenjutsu, aikijutsu) meaning "science or art", making Karate-Do another avenue by which the Japanese could teach and instill discipline, respect and devotion. Many of the former samurai of their respective arts were employed as developers and teachers of the new arts. 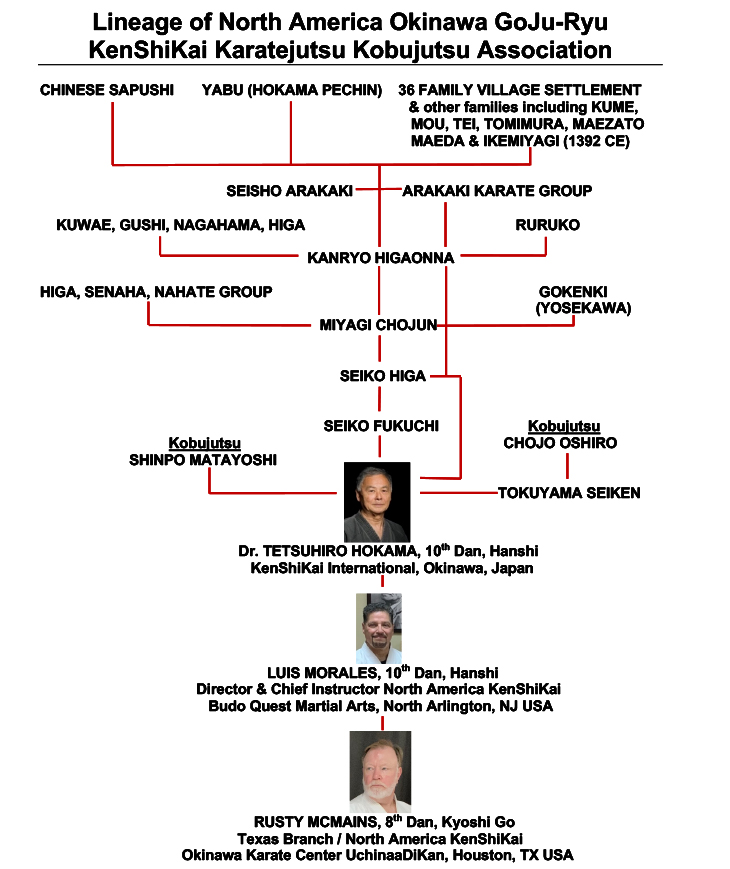