Yamanni Chinen-Ryu (山根正知念流 ), also known as Yamanni-Ryu(山根流), is a classical weapons martial art that originated in Okinawa. It is unique from other Okinawan Kobudo schools in that the other styles were developed for the peasant class whereas Yamanni Chinen-Ryu was practiced by the warrior class.

Yamanni Chinen-Ryu takes its name from the Chinen family, a Ryukyuan family of nobility. According to many historians, the legendary Kanga "Tode" Sakugawa brought a staff-fighting art from China to Okinawa. The Chinen family, who were entrusted with the security of Ryukyuan nobles, adopted and further developed the art over the course of several generations. Like most martial arts of former times, the techniques were passed on mainly within the family. Masami Chinen was the last member of the Chinen family to teach the art.

Upon the death of Masami Chinen, the Chinen family passed the title of Soke 宗家(“Head of Family” / “Head of House”) to his student, Chogi Kishaba, who had begun training with Chinen as a teenager and remained with him as a student until his death. As “soke”, Kishaba held the Japanese ministerial equivalent of a copyright to the system.

Because Yamanni Chinen-Ryu had largely been taught within the Chinen family, Yamanni Chinen-Ryu almost died out as few people had trained in or ever heard of it. In 1979, Chogi Kishaba sent his top students, Toshihiro Oshiro and Kiyoshi Nishime, to the United States for the purpose of bringing Yamanni Chinen-Ryu to the West. In 1985, together they founded the Ryukyu Bujutsu Kenkyu Doyukai 琉球武術研究同友会(Ryukyu Martial Arts Research Federation (RBKD), with Sensei Kishaba serving as the head of the RBKD until his passing in 2017. Shihan Kiyoshi Nishime is the current director and chief instructor of the RBKD in the US.

Yamanni-Ryu is best known for its continuous flow of smooth, fluid footwork and fast transitions between movements. Practitioners are taught to relax between strikes to create speed. Yamanni Chinen-Ryu technique rely on the body’s movement to deliver powerful strikes. Transitions between movements are kept flowing to keep the chain of movement going from the body to the weapon. Using momentum from the previous technique or quickly returning to kamae, allows for a quick, unbroken flow into the next technique. The body should move in rhythm behind the bo so that the bo and the body become one.

The hands continually shift position on the bo based on the technique. During attacks, the hands are placed in a way to give maximum distance from the opponent while still controlling the weapon. After completing an attack, the bo is immediately chambered close to the body to prevent the weapon from being taken away by the opponent and to be ready for the next move. And while Yamanni-Ryu is specifically a Bojutsu system, our lineage has adopted other weapons including sai, kama, tunfa, eku and nunchaku.

A majority of today’s Okinawan bojutsu styles have their roots in Yamanni Chinen-Ryu and as a result, share the same names of some Yamanni Chinen-Ryu Kata. And while these Kata appear similar, the foundational techniques of Yamanni-Ryu Bojutsu are strikingly different in that they are more fluid and dynamic. During kihon practice and kata performance, the feet and weapon remain in near constant motion, with the hands continually moving the length of the bo. 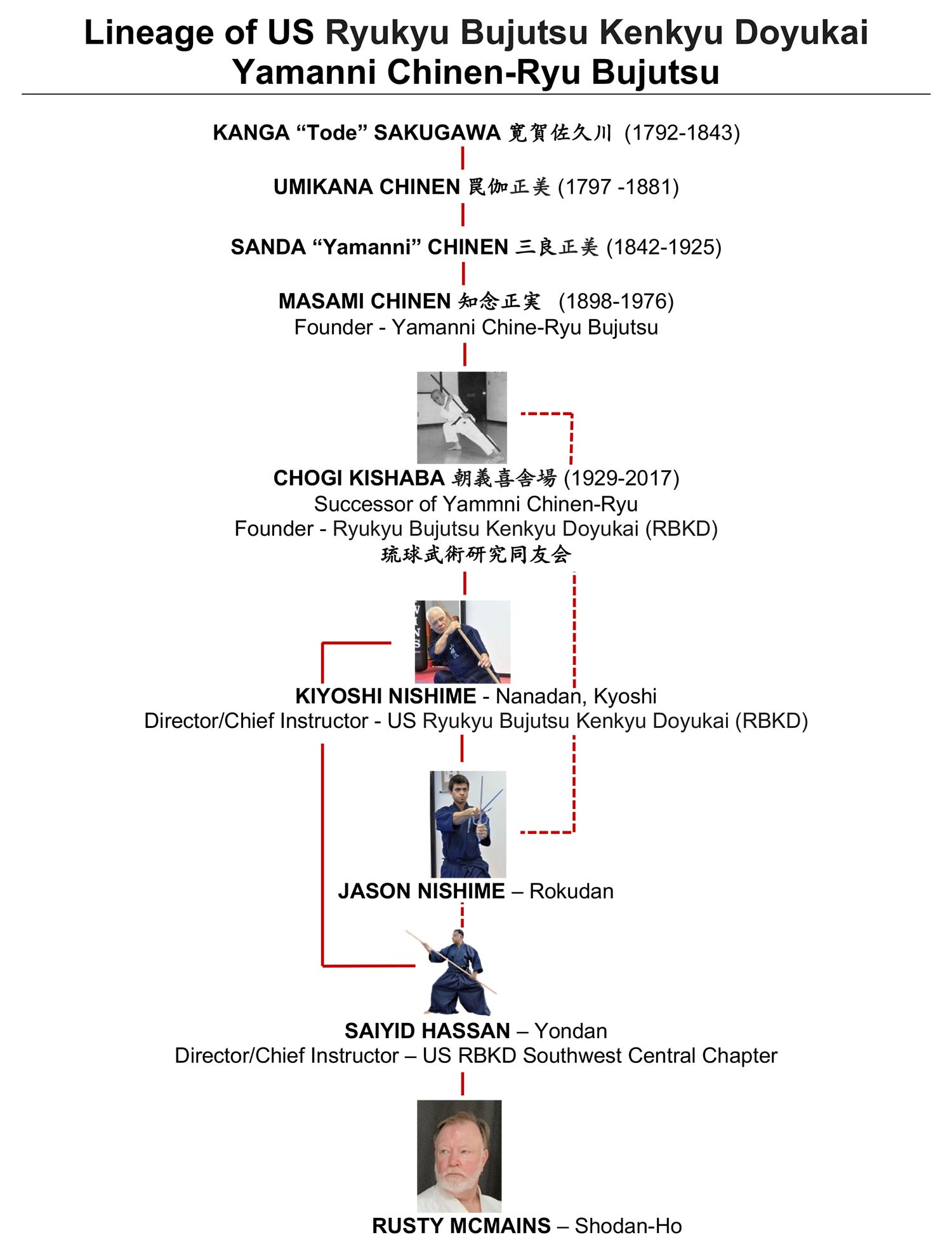